Sergeyenko: Work on new Constitution of Belarus is almost over 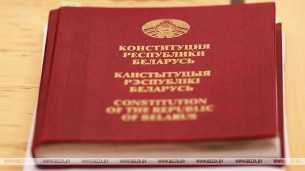 The work on the draft of an updated Constitution has been almost completed, Head of the Belarus President Administration Igor Sergeyenko said in an interview with the Belarus 1 TV Channel, BelTA has learned.

The work is almost over. We have reached the final version of the draft Constitution, but there are still some minor adjustments to be done. The main goal of the working group is to develop a draft law that will meet the requirements of the present time, ensure further development of our country, peace and harmony in the Belarusian land and the welfare of our citizens,” said Igor Sergeyenko.

According to him, the work on the updated version of the Basic Law of the country was quite intense. “There were constant discussions, debates, consultations. Today we can say that changes have affected almost all sections. Major additions and amendments have been made to 77 articles, 11 new ones have been introduced and a new chapter which will disclose the status, powers and competence of the Belarusian People's Congress has been proposed,” the head of the Belarus President Administration said.

The changes in the preamble of the Constitution are insignificant. “The preamble has been supplemented with provisions on the preservation of national identity, sovereignty, spiritual and cultural traditions of Belarus. Today, the theme of the Belarusian identity is of topical importance. I believe that the preamble can be amended during the nationwide discussion by political scientists, critics and historians,” said Igor Sergeyenko.